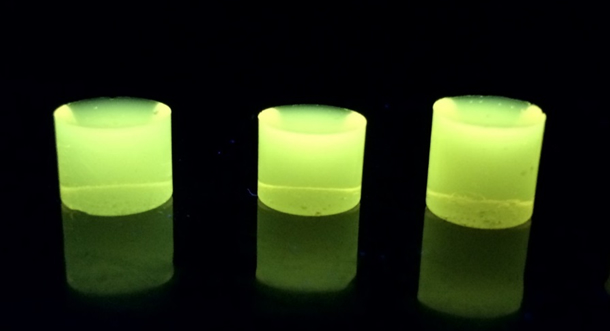 Since the beginning of the SPARTE project on 1st October 2020, we focused on material developments and on the first experiments in radioactive gases allowing benchmarking. Material development is based on 3 alternative strategies:
1) to develop aerogel type architectures based on inorganic scintillator nanoparticles (NP). Their properties in the bulk state in terms of efficiency and timing allow to anticipate performances adapted to our objectives. To date, we prepared colloidal solutions of Y3Al5O12:Ce nanoparticles, ready to be transformed into gel, a crucial step to obtain aerogel. This step requires to obtain extremely concentrated colloidal solution, which was realized until a solid content of 45% by mass. The first gels and aerogels were produced. We now focus on the fragility and transparency of the porous architectures. The UV irradiation method allowing to access in large quantity to more exotic compositions have also been used to prepare also Y2SiO5:Ce and ZnO NP. The current work is to transform the dry powders  obtained into  colloidal solutions  adapted to the gelling process used.
2) to elaborate MOF nanocrystals based aerogels. The latter are much more exploratory building blocks in the field of scintillation, but have the potential to present very good performances as well (those of organic dye). They also have the advantage of being intrinsically nano-porous structures, which can allow gas capture and thus potentially present a capacity to concentrate radionuclides, what would be an advantage for low activity measurements. This first year consisted in developing and optimizing Zr-based MOFs and adapting the synthesis by substituting Zr with Hf in order to increase the density and thus the stopping power. Aerogels were also produced.
3) in using these MOF structures, but to produce single crystals in macroscopic format. A few millimetres large crystals have been obtained.

For all these types of materials, we performed structural, optical and scintillation characterization. To be prepared for the use in real conditions, the radioactive gas measurement benches have been set up, allowing the benchmarking and the optimization of the produced materials. These experiments are now functional.

Impact of the SPARTE project

Based on the general concept of porous scintillator, the SPARTE project aims to overcome a few severe issues in the radioactive gas detection. Assuming that we successfully achieve to develop the appropriate porous architecture showing the required scintillation performances, we expect to obtain a sensor with a high specific surface and an efficient isotropic scintillating response.
Such performances allow to develop a reference detection system, which does not exist so far, and thus a method of calibration for radioactive gases of low concentration-activity down to the level of mBq/m3. It is crucial for the Comprehensive Nuclear Test-Ban Treaty Organization and does not exist yet since current reference measurement methods are limited to about 300Bq/cm3 for only some isotopes of gases such as 85Kr, 133Xe, 3H and 127Xe with the Triple Compensated Length Proportional Counters. The new materials we propose could lead also to an easier reference measurement technique that is expected to be implemented in other national metrology institutes. SPARTE will thus target the following four breakthrough objectives:

- While the current calibration methods are limited to 1kBq/m3 for 85Kr and 133Xe, the first target is to reach a detection sensitivity of mBq/m3 and to propose a calibration method for low activity range (down to a few Bq/m3).

- The second target, based on the experience gain of the first one, is to achieve real time detection of 3H with a significantly improved sensitivity in an easy deployable system. The aim is to combine real time and a sub-kBq/m3 sensitivity. The concept can in addition be widely deployable for the 3H and tritiated water vapour detection in air which would be an important breakthrough in this field.

- The third target is to develop cost-effective real time on-site measurements as an alternative to current technologies. Simpler and cheaper systems could be advantageously deployed, such as 85Kr survey next to Fukushima, control for nuclear power plant or to nuclear reprocessing plants.

- The fourth target, which is the most challenging and risky, is to achieve the detection of 37Ar. This isotope is strategic, because it is produced by the activation of calcium by high energy neutrons and has a relative long half-life time. It is thus a clear and good indicator of underground nuclear tests. We cannot reasonably propose quantified target but even with a poor sensitivity, an on-site detector would be a significant step.

The consortium involves 2 start-ups, Nano Active Film and Icohup, respectively in the synthesis of aerogels and in the field of radioactivity detection. In case of success the development of fast response radon detector for example within the framework of the house monitoring and related automation, or of other radionuclide for the monitoring of the territory presents an important economic potential. The long-term vision on society includes widely deployed detectors toward several nuclear activities.

This website reflects only the authors’ view. The European Union is not liable for any use that may be made of the information contained herein.